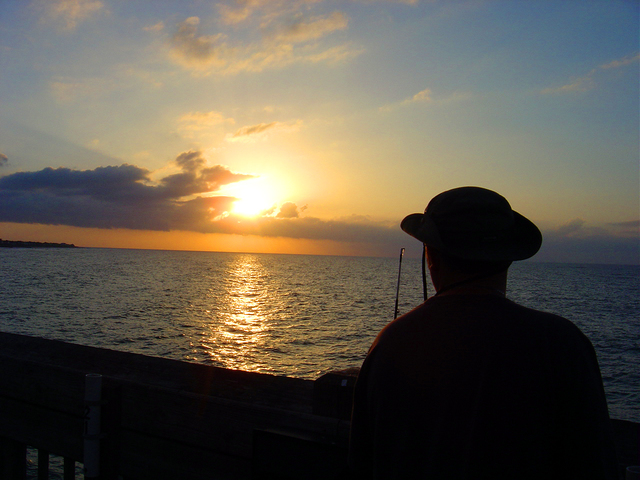 ANDERSON, S.C. — The bass fisherman Skeet Reese rolls into the marina parking lot pulling a boat while bumping to hip-hop on his iPod. His truck is an eccentric size that holds 214 gallons of fuel and requires a climb to the door handle.

Reese’s ride is made more garish because it is wrapped in the yellow and black colors of his sponsor, Lucky Craft lures. Even in dim morning light before a practice round of the Bassmasters Classic, the truck stands out.

When Reese stops, then pulls the hoodie off hair that reveals streaks of dye, it is as if the circus has come to town.

A local sheriff stops to take a picture. A mother, with a toddler in tow at 7 a.m., has driven over from town to get a picture of the truck and a look at the driver.

A competitor headed toward the water looks back and shakes his head, but is it dismay or envy? Other anglers walk by and marvel. One stops and needles.

“Man, that truck is so far off the ground I’d need a stepladder to try and carjack you,” said Ish Monroe, like Reese a Californian. They are competitors and friends.

Reese smiles wide at the stir he has created. This is his brand. Flamboyant. Outrageous.

“Some people think I’m over the top on purpose,” said Reese, 38, who has been a professional fisherman since 1997. “But this is me. I also have the statistics, and the bottom line is, I can back it up.”

Reese was audacious long before he became the 2007 Angler of the Year on the Bassmasters Tour and set himself as the standard in the sport, which opens its 2008 season here Friday on Lake Hartwell with the Bassmasters Classic.

How audacious? Reese grimaces when pressed for details of his impetuous youth.

“I heard you might ask about the dancing,” he said with a sigh.

Reese said that as a teenager he stayed against the wall at a local club, but when he saw the girls flock to the guys who could dance, he decided he had to learn. He became such a good dancer, nightclubs were willing to pay him.

“Dancing was a part-time job at night,” said Reese, who is married and has two daughters, 2 and 5. “In a cage? Yes, I danced in a cage and on a stage. I love to dance. Did I keep my clothes on? I don’t talk about everything out of respect for my family.”

One of the worst decisions he said he made on the Bassmasters Tour was dancing on stage at a weigh-in after a solid day of fishing in a tournament. It made fans who follow the sport clamor for him to dance; Reese says he has stopped dancing so it will not distract from his fishing.

Buzz around a lake in a bass boat with him for eight and a half hours — with the wind chill down to zero — and it is easy to see that it is a mistake to think of Reese as a circus act.

He can skip a mop jig in the one-foot alleyway between a dock and a moored boat, and he can do it with either hand. Reese marks habitats on his GPS, notes water temperatures and, off the record, tells a reporter the scheme for the Classic, which involves currents and fishing quadrants of the lake at different parts of the day.

“He has always been a terrific, technically sound angler who knew all the tricks and all the techniques, and then he learned to just simplify things and go with very precise tactics, and it saves him a lot of time on the water,” said John Murray, Reese’s roommate on the road for nine years. “Underneath all the flashy stuff, the truck, the music, he is just a solid angler who goes at things with full confidence.”

Reese, who describes himself as an aggressive, shallow-water-target fisherman, went three hours without a bite on a practice day and never grew weary of casting. He worked only three rods and three baits for the eight and a half hours on the lake.

It is a style that helped him to seven top-10 finishes in 2007, when he won Angler of the Year by 118 points over the three-time winner Kevin VanDam. Reese won one event in 2007 and finished second in the Bassmasters Classic by 6 ounces.

Reese caught his first bass when he was 8 and fished his first tournament when he was 14. He is effective because the versatile fisheries in the West taught him how to manage different environments.

Reese was shaped by more than the fisheries. He said he was a misfit who wore earrings and eyeliner, which made for quite a sight on Spring Lake in Santa Rosa, Calif.: a grunge-rock kind of teen, skipping school and flipflopping to the lake with a tackle box and fishing vest and settling into a float tube.

Reese said fishing was his escape from his impetuous behavior, which included abusing alcohol and drugs. He dropped out of high school before his junior year and took a job stocking shelves at a grocery store. There was little hint, on the surface at least, that 22 years later he would have more than $2 million in earnings as a professional fishermen.

“Fishing essentially saved my life,” Reese said. “I raised myself and I had a go-to place at the lake where I could get away from things, all the bad stuff I was into. It allowed me to refocus my energy.”

His energy is now focused on staying on par with VanDam. Reese wants to close out tournaments with victories, not merely top-10 finishes.

“I don’t want to be known as the California kid who can dance or has the big truck,” Reese said. “I want to be known as an elite angler, and I think that finally happened last year. It was a relief to me to be recognized for fishing and for people to say, ‘O.K., he knows what he’s doing.’ ”

A version of this article appears in print on , on Page D1 of the New York edition with the headline: Angler Who Can Make His Line Dance, Too.