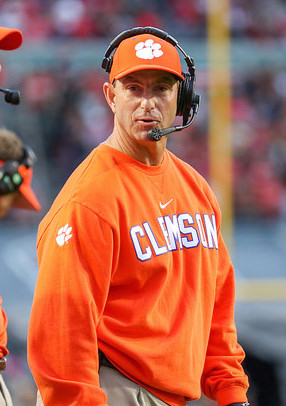 CLEMSON, S.C. — Clemson center Jay Guillermo could disguise his unhappiness in front of his teammates, but the hoax had its limits. His face in the morning mirror, he said, made him shudder.

Guillermo had tried to cushion his fall from star offensive lineman in high school to banged-up backup in college with nightly drinking binges in the bars along College Avenue here in the fall of 2014. Pain lingered in his surgically repaired right foot, and he drank to heal that, too. By the end of December 2014, after weeks of drinking, Guillermo thought he was through as a football player. He was 20 years old.

“I would look in the mirror in the morning, and it was all negative thoughts,” he said. “I didn’t know a person could get so low.”

In January, Guillermo, regarded as one of the top high school linemen in the country in 2011, quit school and returned to his parents’ home in North Carolina. For six months, Guillermo said, he went through a personal atonement, which included substance-abuse counseling, an unorthodox fitness regimen and long talks with his grandfather, Ron Greene, a retired high school football coach.

The regeneration of Guillermo’s life and career took months, but both are back on track. Guillermo not only returned to Clemson for the start of this season, he is the starting center for the top-ranked Tigers (13-0), who will play Oklahoma (11-1) next Thursday in the Orange Bowl, the first semifinal of this season’s College Football Playoff.

Guillermo’s personal turnaround is a lesser-known but critically important factor in Clemson’s success this season, a campaign that began with an inexperienced quarterback, Deshaun Watson, and plans to protect him with five new starters on the offensive line, including a true freshman left tackle and career backups. On any line, where chemistry and trust count for a lot, an experienced player like the 6-foot-3 Guillermo, a redshirt junior, can be the difference between victory and disaster. His teammates knew that, too.

“When we helped him through that, and welcomed him back with open arms, I think that helped him and us come together,” left guard Eric Mac Lain said of the offensive line’s emergence as a cohesive unit.

The results have been remarkable: Clemson averaged 38.5 points and 510.6 yards behind its rebuilt line. But Guillermo nearly missed it all.

Guillermo said he started becoming a regular in the College Avenue bars after he was sidelined with a broken foot in October 2014. His career was already off track because he had become a reserve after being a highly acclaimed recruit. Now foot surgery and six weeks off threatened to bury him on the depth chart.

He returned after rehabilitation and played in a Nov. 22 game against Georgia State, but the next week, against South Carolina, Greene said, Guillermo’s surgically repaired right foot was stepped on during a play. He writhed in pain, Greene said, but “he didn’t want to come out because he was getting some playing time.” Guillermo played in the Tigers’ bowl game against Oklahoma, but by then his drinking was out of control.

Guillermo could not name his favorite drink because, he said, “I liked them all.” His grades plummeted.

“Anything I could get my hands on, I was drinking,” he said. “It was a whole lot, and I was getting depressed.”

“He went to the bars and everybody knew it,” Mac Lain said. “We saw him going through some bad stuff, but when your brother tells you, ‘No, I’m good,’ you believe him. Sometimes you have to push it to where we could have prevented that.

After Clemson’s victory over Oklahoma in the Russell Athletic Bowl on Dec. 29, Guillermo told Coach Dabo Swinney he was going home.

“I wasn’t sure he would ever be back,” Swinney told reporters a week before the 2015 season.

Guillermo’s family had moved to North Carolina from Tennessee while he was at Clemson, so he joined them there and entered counseling. Guillermo said he was found to have depression; he also declared himself an alcoholic.

Guillermo said that through talks with Greene about life and football, he slowly started to come out of his depression. He said he stopped drinking, and Greene took him to the weight room at Burns High School in Lawndale, N.C., where Greene had coached for 25 years.

“One day I told my grandpa I needed to do something different, besides the weights,” Guillermo said. “I asked him for an ax and started cutting down trees behind his house.”

Greene said Guillermo chopped down tall pines, then cut the trunks into shorter lengths to use in weight training before reducing them even further, into firewood.

Guillermo said he stayed in touch with Swinney, who made videos of spring practice workouts available to his absent player. Watching them and working out, Guillermo decided he missed football. On June 19, he signed a lease for a one-bedroom apartment at Clemson.

“I’m pretty much never near it,” Guillermo said of the night life. “I live by myself. I really, really, really, really try and stay away from all of it. It is tough in a big football college town. My friends outside of football know they didn’t help the situation a lot, and they have been a big help since I have been back. I had a sit-down talk with some of them, and they were in near tears apologizing.”

Guillermo’s closest friends on the football team, the offensive linemen, call themselves the Beard Gang. They include the freshman left tackle Mitch Hyatt; Mac Lain, a fifth-year senior; the alternating sophomore right guards Maverick Morris and Tyrone Crowder; and the senior right tackle Joe Gore. The entire group, including Guillermo, had six starts between them when this season began.

Now they are two wins from a national title.

“My grandfather told me this is the toughest thing I will ever go through,” Guillermo said of his struggles with injury and alcohol. “He also told me when I came out of it, it would be the thing I would be most proud of. He was right.”