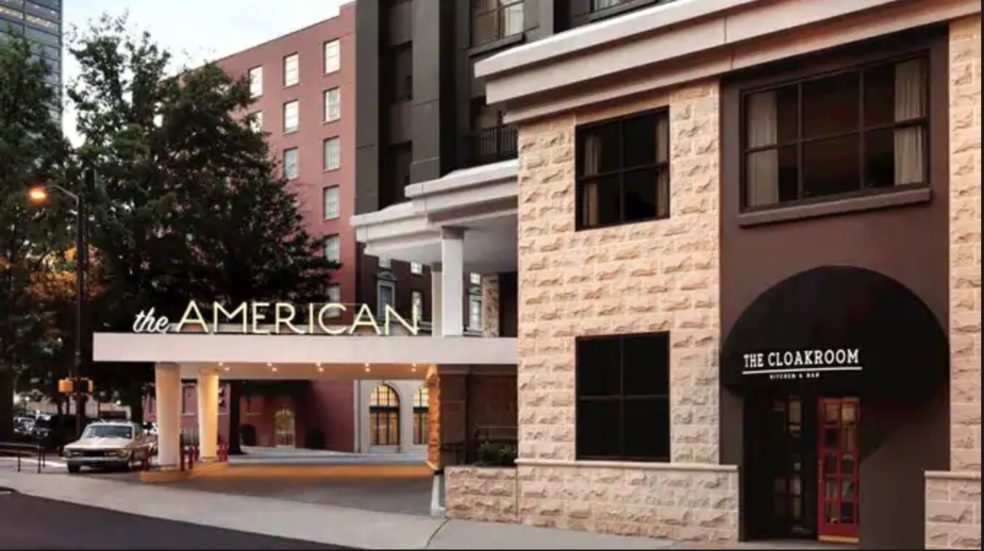 By Ray Glier – for the Atlanta Journal-Constitution

In 1963, Bill Bartholomay, head of a consortium that owned the Milwaukee Braves, began petitioning Major League Baseball to move the Braves to Atlanta. But MLB wondered how welcoming Atlanta would be to a team with black ballplayers.

Bartholomay sat before a committee of owners and was confronted by questions that referenced the lineaments of the Jim Crow South: separate water fountains for blacks and whites, the Ku Klux Klan, restaurants banning blacks, and no integrated hotel downtown for black ballplayers or their families.

“Oh, but we do have an integrated hotel,” Bartholomay corrected a member of the committee. “The Americana.”

The Americana gave Bartholomay a clear conscious. It was right there, brick and mortar, on Spring Street. The South was evolving, he told his business partners, albeit at a reluctant pace.

“That committee was tough, but they wanted to make sure Atlanta was going to be hospitable,” said Bartholomay, 89, chairman emeritus of the Braves. “That hotel helped us move the team here. It was a must. We were approved in October 1964.

“I think it is a great thing the hotel is being brought back to remember that time.”

The Americana, which opened in 1962 with a room rate of $13.93 per night, was the first integrated hotel in downtown Atlanta. It has been revived by downtown developer David Marvin as The American, and branded a Doubletree by Hilton. It sits diagonally on what was Spring Street and is now Ted Turner Drive. Under the restored porte cochere is a 1965 Plymouth Barracuda, the hood ornament, if you will, of the hotel.

“It wasn’t until after we bought it that we began to fully understand the significance of the hotel and begin to cultivate our vision of the finished product,” said Marvin, whose company, Legacy Ventures, bought the hotel two years ago from the private equity firm Blackstone.

“There’s significance all over the place here. There is this nexus and relationship to the civil rights movement in this building.”

The original owners of the hotel, brothers Irving and Marvin Goldstein, were local dentists and they were the ones to declare it integrated 55 years ago.

The Americana was not a one-off of civic defiance by the Goldsteins. Their imprimatur was woven throughout the political and social landscape of Atlanta in the 1960s, which included providing meeting space in the hotel for civil rights activists. Marvin Goldstein spoke at Dr. Martin Luther King’s funeral. Coretta Scott King gave the eulogy at Marvin Goldstein’s funeral. That’s how connected the brothers Goldstein were with the movement.

David Marvin has retrofitted the hotel to a mid-century modern boutique. There is a 1963 Bambi Airstream on the pool deck to serve as the bar. There are classic, ‘60s era Igloo refrigerators in each room, painted in the colors of the time, pastel blue or orange. The tableau includes period lamps on bedside tables and desks.

The penthouse suites have been restored to elegance. The Kings stayed there, and so did President Richard Nixon, Elvis and James Brown, among other luminaries.

David Marvin went full revivalist with the restaurant called The Cloakroom, a handle straight out of the Cold War. In between two chairs, which are off in the corner of the restaurant, is a table with a single red phone: the Kremlin to White House hotline. Pick up the handset and you can hear a recording of President John F. Kennedy worrying the American people about the Cuban Missile Crisis in October 1962. Look up and you can see a framed aerial photo of the Cuban missile site filling a whole wall next to the bar.

What really makes the hotel sing its past are the stories. Dr. Adam Goldstein, the youngest of five children of Marvin and Rita Goldstein, said his father told him that when he went before the city for the hotel building permit, he was reminded of the city code that declared there had to be separate water fountains for blacks and whites.

Do I have to have water fountains? Goldstein asked the city. No, he was told.

Then we won’t have water fountains, Goldstein said.

There are still no water fountains in the lobby area, 55 years later.

The brothers had seed money for the hotel, said Adam Goldstein, because his father was a terrific poker player. He would win from his comrades in World War II and send hundreds of dollars home to Irving, who invested it. They used the funds to start their dental practice and to attract other investors for the hotel, who were not informed of the Goldsteins’ plans to integrate it.

The grand opening ball was June 3, 1962, but the hotel’s celebration was muted. It was not because the KKK protested on the sidewalk out front. It was because of one of the most epic tragedies in Atlanta history.

“It was the same day of the Orly plane crash,” said Bob Hunter, a hotel real estate broker.

An Air France jet crashed on takeoff from Orly airport in France killing 122 people, 106 of them Atlantans on a cultural exchange trip.

Mayor Ivan Allen Jr., who had conspired with the Goldsteins to defy segregationists and integrate the hotel, missed the grand opening because he was hurrying to Paris in the midst of tragedy.

The hotel was not the only family business to get sideways with local customs. Marvin and Irving Goldstein integrated their dental practice in the late 1950s. When a customer told Marvin she did not want to sit in the same waiting room as black patients, Marvin said he would help her find another dentist.

Dr. Ronald Goldstein, Irving’s son, joined the family practice in the early 1960s. He was the first official team dentist of the Atlanta Braves. That’s right. He used a drill on The Hammer, the great Hank Aaron.

The goodwill came with a price. The KKK once started a fire at the end of Irving Goldstein’s driveway, Ron Goldstein said. Still, family members said Marvin and Irving would never allow themselves to be intimidated by the racists.

Meanwhile, the “Atlanta Stadium,” the first home of the Braves, was being built on the south side of town. Construction started in April 1964. Bartholomay had not yet received full approval to move the team so he had to be surreptitious with his planning. He wanted to keep an eye on the construction of the stadium and sent assistant farm director Dick Cecil to Atlanta every several months. Cecil stayed at The Americana.

“I checked into the hotel under an assumed name,” said Cecil, who still lives in Atlanta. “I was Dick Clyde.”

The Goldsteins were forced to change the name from the Americana to the American in 1966 when they were sued by the owner of The Americana hotels in New York, Puerto Rico and Miami. Fine, said Marvin Goldstein. He had a worker climb a ladder and take the last “a” off the marquee.

“(Goldstein) would be really pleased with what they have done with the hotel,” said Anne Strickland, Goldstein’s daughter. “He had such a love for this hotel.”