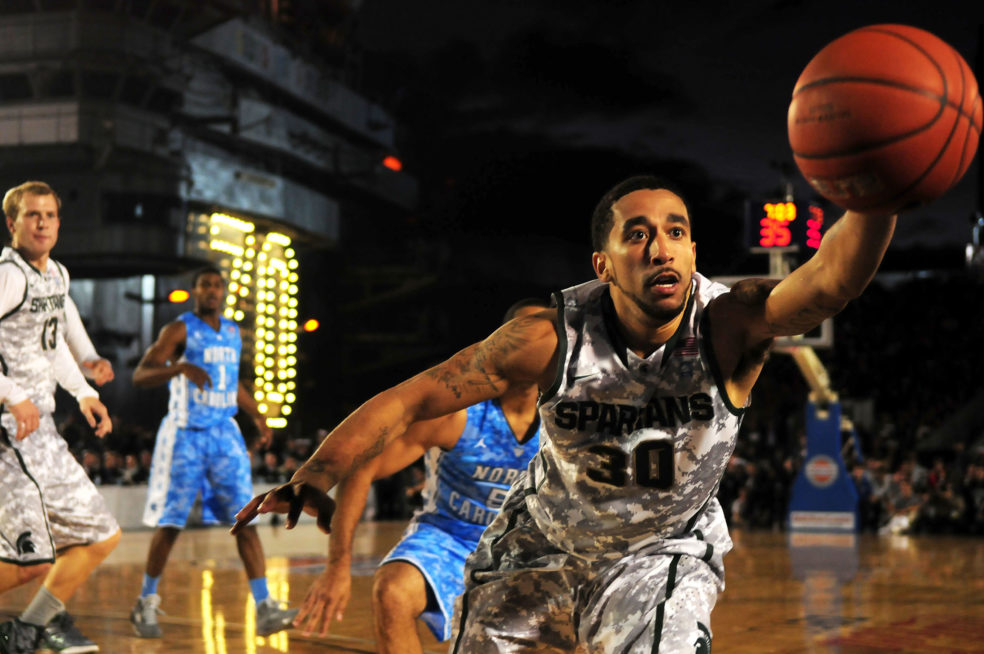 NBA teams and players combined to reach the 1 billion milestone in social media ‘likes’ and ‘followers’ in February. That is an epic number, but consider this: just 1 percent of those 1 billion fans buy tickets to NBA games.

Obviously, the 1 billion followers are spread around the globe and many do not have access to the NBA arena and tickets.

But what about the fans who have access to the arena, but stay home? How do you close the gap between social media followers and ticket buyers?

Here is something we did with the Pittsburgh Pirates.

We put pitching coach Ray Miller in front of select ticket holders before a game and he gave them an in-depth scouting report, including the pitch-out sign the Bucs would use for one game. It was pure Inside Baseball.

The season-ticket holders could not wait to get to their seats and see the pickoff sign come from the bench, to the catcher, who relayed it to the pitcher and first baseman (the Pirates changed signs all the time)

We helped build the brand of the Pirates by demonstrating Ray’s expertise. As pitching coach, he believed in three things, “Work fast, throw strikes, change speeds.” He had all sorts of insights into the game and those fans at the special event were handed a benefit.

These ticket holders, of course, told their friends about the benefit of buying tickets to see the Pirates.

So deliver this kind of “Behind the Scenes” content regularly to your customers with the help of social media channels. Research and find fans who should be season-ticket holders and pull back the curtain and lure them in with social media. They will come to the game for a peek, and then you can nurture that lead.

It’s a question of whether we are giving the kind of content fans want to see. The followers, the tweets, the retweets, the Instagram, etc., depend on the content. Can you give content that will make your fan on the couch get more connected, and then sell that fan a ticket package?

We proposed to schools that they hire 18 students with interest in communications, marketing, or Journalism, and assign them to each varsity sport. Their job is to get a 30-second video of the coach talking strategy. Do this on a routine basis.

These videos are then posted on social media to familiarize fans with their favorite sport and athletes, and to provide behind-the-scenes looks at their team.

Here is another path:

“Reality TV” is one of the most important ways to convert social media followers to ticket holders. Get pictures and videos of your roaring crowd up on Facebook, Twitter, Instagram, You Tube, and other channels.

Show the dunk, then the crowd exploding. The excitement is real and authentic. The fan on the couch will feel left out.

Here is another way to make going to the game a far better experience than staying home.

Seventy percent of fans inside a venue use Twitter during a game. When Graham Zusi of Sporting KC scores a goal late in the game have your sales staff send this tweet to fans inside the arena:

“Enter your payment information, get a special price, come to Gate C after the game, and wear a Zusi jersey home!”

You only get that special offer if you are in the house and revved up because of a big goal.

Social media can be a valuable partner, not an adversary.

Some college and university athletic departments are reluctant to hire a staff person specifically dedicated to selling tickets to women’s sports. Administrators feel the position does not pay for itself.

But consider those things that have nothing to do with ticket revenue. Then you will see the value.

The staff person you hire for women’s athletics promotes interaction between the women’s teams and the community. The group ticket sales may yield a modest $2 and $3 ticket, but think about visibility for your coaches:

Clinics after the game.

So the athletic administrator must think long-term about capturing and working with this rising tide of participation. Do not miss this opportunity to connect young girls to your brand.

There are some angles to be played.

For instance, use the teamwork inherent in women’s sports to lure fans to your product. The chemistry in a women’s basketball game can far exceed the men’s game. The first pass in the women’s game is never the last pass. They share the ball. Promote that in your clinics for girls and their coaches.

Also consider the healthy lifestyle you are promoting among young girls who are looking for role models.

The centerpiece of your strategy is interaction. People are tied to people. People are not tied to signage, or some other marketing.

Aspire calls this strategy FEP: Fan Experience Program. It is something Disney has concentrated on for years, which is doing 100 things 1 percent better. Many of those 100 things have to do with the interaction with customers.

Interaction with fans who are coming will make them come more often. It is a fundamental we believe in at Aspire. Interaction will also retain fans and acquire new ones.

That’s why colleges and universities should do what we have done at Army and Florida Atlantic University and hire a staff member to work only with women’s sports.

If you get the right person in that position ___ someone who has a passion for the women’s brand___they will build a connection between the women’s teams and the community through events, not just advertising.

The college women’s coaches and players will appreciate that there is a marketing professional looking out just for them.

Here is an example. When an athletic administrator asked the Army women’s basketball staff if there was a coach who could speak at a post-season banquet of a girl’s program that had bought group tickets during the season, the Army staff enthusiastically agreed to send a coach as guest speaker.

Justifying the position of a “women’s only” ticket-seller is not hard, if you think more in terms of benefits outside of ticket sales.

Think of the eco system. When a school is recruiting a high school athlete, that athlete wants to attend a school with an enthusiastic crowd at events. When you get enough talented athletes, winning follows.

What follows winning? Ticket sales, followed by concession revenue and sponsorship, along with interest in the program’s initiatives for girls, like sport-specific clinics, health fairs, or overnight camps.

It all starts with a commitment to the women. Invest in them with staff and there will be a reward.

Breakfast with Bernie
May 2016

The whole concept of a Yield Management strategy is to price a ticket appropriate to its value. Over and over, schools and franchises leave money on the table because they do not know how to accurately price their premium ticket.

That can be millions of dollars in lost revenue. In every case where we have done a Yield Management Study we have found unrealized revenue.

It’s time you did a scientific analysis and changed your mindset and got your prices in line with what fans will pay. Stop giving away your product.

So how do you erase years of the mental conditioning of “our product is worth only X”?

One of our core principles is that we will push you and challenge your assumptions. You will make the final decision, but Aspire is known for being in your ear. Notre Dame appreciated our tough-love when it repriced its stadium, so did Ohio State.

That’s the power of the third-party. We can get between the school, or the pro franchise, and the fan and mediate the conversation. We are a facilitator. We teach a logic and a pricing philosophy to the caretakers of the university, or professional organization. If a school asks us to push them, they should be prepared to get pushed.

Our methodology involves a meeting inside the venue of all the principals involved. When we met to discuss pricing at Notre Dame snow covered the emerald green field. We are hands-on.

We give each person a map of the stadium and we have them go sit in those seats and draw for us where they think the best seats start and where they end.

The process evolves from there.

“It is a matter of getting the foundational ticket price correct,” said Michael Farris, the director of strategic consulting and research for Aspire. “Price is not, generally, a top motivator. The top motivator is affiliation with the team and the experience.

“Top of mind to me is making sure some sports properties get over that hurdle that their fans are going to revolt. It’s all about pricing strategically to the right segments that we know are going to be sitting in the stadium.”

Aspire will use data available internally and then do its own surveys. We look at data from sell-through-its in the past, so we know how people have bought tickets and what inventory they value.

Be prepared for us to reveal some things you did not know about your fan. We will challenge assumptions in workshops by getting everyone talking.

The ultimate goal is to build a consensus and setting the price for the full venue.

Aspire can counsel you on how to wade into the price increase. It can be a five-year plan of incremental increases. It is a plan cast in sand, so you can redraw the lines, and adjust. It is not a good idea to rip the band-aid off the wound all at once and make an increase. You know that.

If you are afraid of fan backlash and media backlash have a fan communication and media communication plan in place. Whatever you do, manage the process because a hyperactive media can incite the fan base.

That could mean one-on-one interviews with the media. There is a way to crush the “What about the average fan?” argument.

Just remember this when you are doing Yield Management: For those fans motivated by price first, you have other seats in the house.

It is not about sticking it to season-ticket holders and trying to eek out what you can. Be tactical, be smart about it, and realize where you can have some volatility and some elasticity.