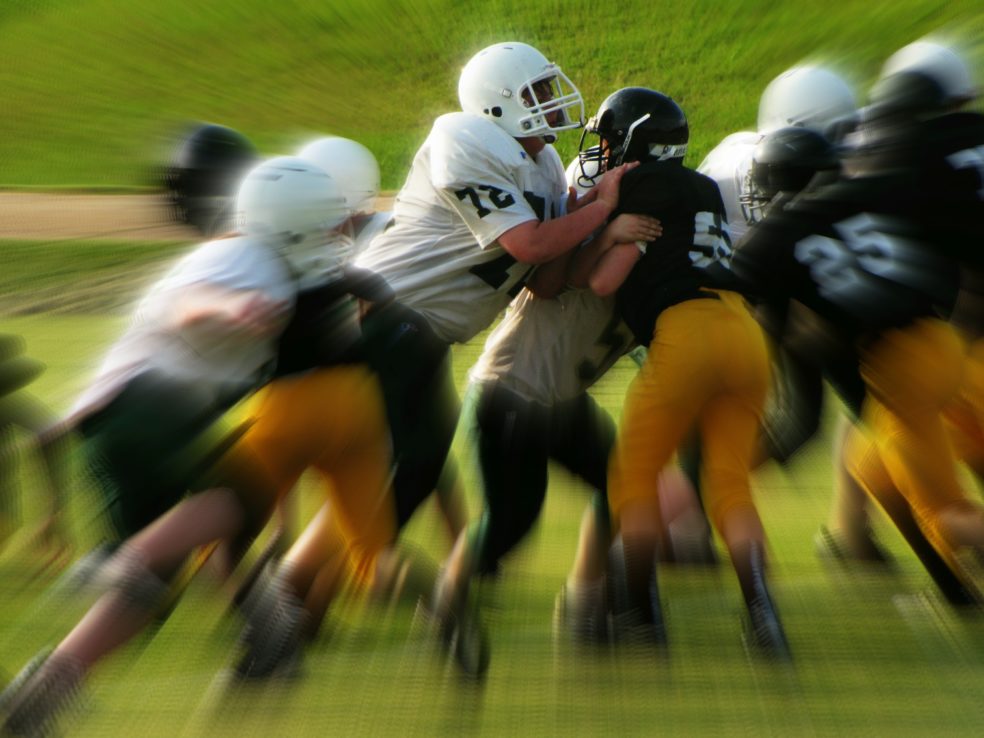 By Ray Glier – special to CNN

One moment, Garrett Gilkey was standing on his big stage. The next moment, he was being plowed under it.

There was a small crater in the turf where the 314-pound Gilkey tried to dig in his cleats and stop the charge of John Jenkins, a 359-pound defensive tackle from the University of Georgia. Gilkey is an offensive lineman from Chadron State, an outpost in northwest Nebraska, and NFL scouts were gathered around to see if the player from a small Division II school could block a player from a Goliath of college football, a school from the mighty Southeastern Conference.

Jenkins thrust his powerful claws straight into Gilkey’s chest and it was an instant mismatch. Big beat little, for the moment.

It was a one-on-one drill at a practice for the Senior Bowl, a college football all-star game, which is the next step in the 2013 NFL draft process. Gilkey was shoved back by Jenkins and left standing on a white towel, which was the imaginary quarterback Gilkey was supposed to protect. This would have been a sack in a real game, the quarterback in a heap at the feet of Jenkins, and Gilkey humiliated.

Gilkey, a small-college nobody, did not pick up that white towel and start waving it as a flag of surrender.

He wasn’t going to be defined by one stinking play.

The next snap in the one-on-one drill with Jenkins, Gilkey quick-setted Jenkins, which means he hit him first. If the big guy from Georgia was going to bull rush Gilkey in a drill with a helmet and no pads where coaches want to see players work with their hands, not power, Gilkey would counter with his own shifty move. He didn’t take a step back to pass protect, he attacked Jenkins with a block.

“Punched him right in the face mask,” said Gilkey, whose long blond hair flowed out of the back of his helmet. Then he smiled.

“I’m small school, he’s big school. There might have been a few moments of awe because of the stage we’re on here, being here in front of a lot of scouts, but after that first hit, it’s just football. You have to show something here, some competitiveness. You don’t let people intimidate you because you are from a small school.”

Jenkins was with Gilkey on every point. “I encourage him and others to come on, let’s go, if they feel they have to make a name for themselves against me,” Jenkins said. “I know he’s on the big stage, but I’ve got to eat same as he’s got to eat.”

It was like that all week here at the Senior Bowl workouts. There are 700 NFL personnel studying 106 college players up close in advance of the April 25-27 draft. It is not only North vs. South in the game, but it is big school vs. small school, big name vs. no name. They will play the game at 4 p.m. ET on Saturday, but the skirmishes Monday through Friday at the practices are the real prize here for scouts and NFL draft wonks.

Players like Georgia’s Jenkins are on television throughout the fall. They have less of a task getting space on stage at a prestigious game like the Senior Bowl. Gilkey, who is 6-foot-5, 314 pounds, has to depend more on the keen eye of scouts. A tape of a Chadron State game was sent to Phil Savage, the Senior Bowl executive director, who is responsible for issuing invitations and making sure legitimate NFL prospects are in the game. Savage watched the tape and saw Gilkey keeping his feet during a driving snowstorm on a slick field and still protecting the quarterback.

Brandon Williams, a 341-pound defensive tackle from Missouri Southern, sent a tape showing him walking on his hands displaying spectacular upper body strength. Savage invited Williams, too. It is a little gimmicky, but you do what you have to do. The Senior Bowl is a melting pot of talent. Eric Fisher, an offensive lineman from Central Michigan, is playing on the same team as Denard Robinson, the star quarterback from Michigan, who is here as a wide receiver/kick returner.

Once here, small school can make plays over big school. Leon McFadden, a cornerback from San Diego State, dashed in front of the Georgia wide receiver Tavarres King to make a one-handed interception.

“When you make a play like that, you flush it, forget about it, and keep it rolling and show scouts you can do that play after play,” McFadden said. “Don’t make one play out here and think it’s enough.”

McFadden thought back to his interception and smiled wide. “Anybody from anywhere can play this game,” he said.

He’s right about that. Margus Hunt is from Estonia. He is 6-foot-8, 277 pounds and is the former junior world record holder in the discus. Hunt played college football at Southern Methodist and is turning heads here with “freakish” athletic ability.

Ezekiel Ansah is a 6-foot-5, 274-pound defensive end from Brigham Young, by way of Ghana. He played college football just 2½ seasons and is projected as a high-round pick in the draft.

There are two scouting services for NFL teams, Blesto and National Football Scouting, who scour the outposts, those small schools, and file reports for 28 NFL teams (four teams do not subscribe to the services). NFL teams have their own scouts who endure plenty of windshield time driving to small schools spread around the country to get a peek at a player. When word of a 314-pound lineman with quick feet spread, NFL teams flocked to Chadron, Nebraska, to see Gilkey. Savage said NFL scouts will try to stay mum on a prospect from a small school to keep teams off the scent.

“I sent a questionnaire out with Gilkey’s name on it, along with some other names, and asked whether these players should be invited and all the scouts said yes, yes, yes to the others and no to Gilkey,” said Savage, a former scout and general manager. “I knew something was up when they all said no. They were trying to sit on him. I got some tape, looked at him, and invited him.”

There are some things that have nothing to do with skill that NFL scouts look for in a prospect, be they from big schools or little schools.

“I like to see if they get along,” said Ted Thompson, the general manager of the Green Bay Packers. “It’s an indication that they like to play the game. Most of the good ones like the whole process, the time in the locker room, and the practices.

“This game is a lot more than playing Saturdays and Sundays. You look at a guy and you say ‘Is he a good, old-fashioned country ballplayer, or not?'”

If Savage did his work in selecting these teams — and most scouts think he did with the help of all his NFL contacts — 90 to 95 of the 106 players at the Senior Bowl will be drafted in the seven rounds. The other 10 to 16 players will be part of “college free agency.” They can sign with any team as “undrafted free agents.” Teams have approximately $75,000 in bonus money to use to invite undrafted players to their preseason camps.

As Garrett Gilkey and others will prove, the NFL welcome mat is wide and wide open. The small-school player can walk through the same door as the big-school player.